Sing Me a Song of the South / music by James W. Casey; words by George A. Norton 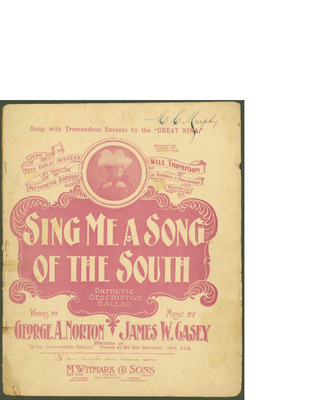 Lyrics:
First verse
A well fought battle ended, a vict'ry nobly earned, A wounded soldier lying where he fell, Thinking of the mother, to whom he'll ne'er return, And wond'ring who to her his fate would tell; He called his comrades to him, his face was cold and white, And well they knew death's angel hovered near; He said, I'll answer roll call, boys, far away tonight, But one more Southern song I'd like to hear.
Chorus
Sing me a song of the Sunny South, One with a sweet refrain, Sing me a song of Dixie Land, That I may be happy again: Sing me a sweet Southern melody, Something of bygone days. Sing one song of my Old Kentucky Home, Sing me a song of the South
Second verse
All nature seemed to mourn him, for ev'rything was still, Except the voices of his comrades nigh, The song they sang so sweetly, was echoed by the hills, That seemed to sadly murmur their reply: At last the song was ended, but ere its echoes ceased, They knew his spirit soul, had passed away; And as they gently lowered him into the grave of peace, Their thoughts were of his last request that day
(Chorus)