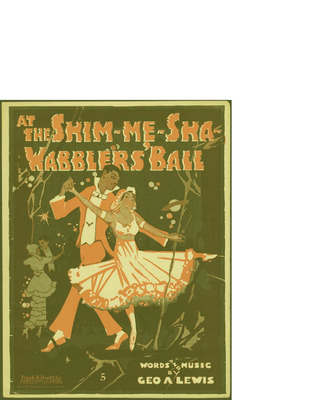 Lyrics:
First verse
They had a swell time down in old Memphis town At the Shimmeshawabbler's Ball; Alexander and his big Jazz Band made the music shake the hall. They danced all night till the broad daylight, And still they wanted to dance some more; They couldn't stop that funny hoop, But continued to dance round the floor. Alexander rose to say, 'tis now the break of day, We'll play just one more tune for you, And then I'll say we're through.
Chorus
All the darkies were their dressed in their best Sunday wear Down at the Shimmeshawabbler's Ball Some high browns short, some high browns tall And high yellows lean and small They Shimmeshabbled round the hall Wherethe alligators wiggle and the tutles crawl, And they had a hot time one and all At the Shimmeshawabbler's Ball. All the Ball.
Second verse
There were some brown skin gals with high yellow pals At the Shimmeshawabbler's Ball; There were choc'late browns from nearby towns That were gliding round the hall. Old Deacon Lee, he went wild with glee, And danced all round on that ballroom floor; He grabb's Sis Brown from Memphis town, And he call'd for some more and for more. For he learned it right away and then had this to say, There'll be no service Sunday night, Instead we'll learn this right.
(Chorus)