Harrison with other senators. 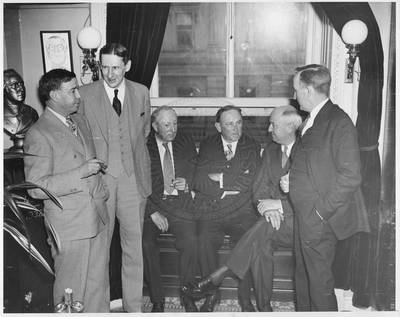 Note on back: "These gentlemen were bitterly opposed to the Soldiers Bonus Bill and are shown after the Senate had voted to sustain President Roosevelt's veto, 40 to 54, May 23. Left to right: Senator Dennis Chavez of New Mexico; Charles Vest, President Roosevelt's contact man; Senator Pat Harrison of Mississippi; Senator Joseph T. Robinson of Arkansas, Postmaster General James A. Farley and Senator Joseph O'Mahoney of Wyoming. 5/23/35."