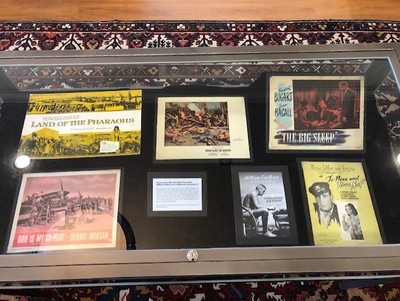 Did you know that 1949 Nobel Prize author William Faulkner was a Hollywood screenwriter???

Faulkner did not earn enough money from his fiction to support his extended family, so he periodically migrated to Los Angeles for a few months off-and-on during the years 1932 to 1954. He was typically hired as a “motion picture doctor” – not providing the entire script, but revising scenes that required the skill of an accomplished author. As a result, he only has six actual screen credits, although he assisted with numerous other films. He never wrote screenplay adaptations of his own novels and short stories.

Memorabilia items on display are from Faulkner Small Manuscripts in the Archives & Special Collections.

(Exhibit by Leigh McWhite with assistance from Sydney Lynch.)