I Want My Lulu / music by St. Clair Karl; words by Lev Dockstader 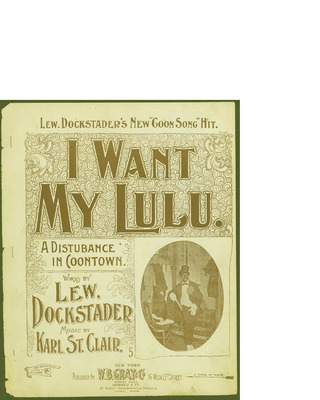 Cover: photo of Lew. Dockstader in blackface; A Disturbance in Coontown; Publisher: W. B. Gray and Co. (New York)

Lyrics:
First verse
I had a gal and her name was Lou, Thought unto me dat gal was true, But with another coon she flew, It almost broke my heart in two, I went to the place where she resides, And for dat wench I loudly cried, Somebody hollored from inside, Who do you want? and I replied,
Chorus
I want my Lulu My baby Lou, I loves her true Indeed I do, I want my Lulu My baby Lou, I'd rather die than lose Lulu. I want my lu
Second verse
Up to de door like a cat I ran, There stood a dangerous big black man, Had a piece of lead pipe in his hand, I drew my gun, de fight began, De coon took de lead pipe beat my head, Left me a laying dere for dead, When I cam too that coon had fled, Den I got up and loudly said.
(Chorus)
Third Verse
Round dat ere house until dark I stayed, I sharpened up my razor blade, Den a big hole in de door I made, Crawled inside while my plans I laid, I sneaked up de stairs with stealthy tread, Carved the big coon and thought him dead, Den with my Lulu off I fled, And as we left dat house I said.
(Chorus)